This update provides a summary of recent developments in the uranium industry, as well as provisional information related to the Company’s key first quarter operating and trading results and 2019 guidance. The information contained in this Operations and Trading Update may be subject to change.

Although major producers continued to operate at decreased production levels during the first quarter of 2019, market prices weakened in response to an increase in uranium sales offers for which there were few interested buyers. While the supply and demand picture appears to be more balanced in the medium-term, the lack of very near-term utility interest thusfar in 2019 reflected participants’ prudent contracting approach in light of the United States Department of Commerce’s (DoC) investigation under Section 232 of the U.S. Trade Expansion Act (1962). Being the largest uranium consumer with 98 operating reactors, the uncertainty surrounding potential trade restrictions in the US continues to hinder contracting activity. The DoC submitted its report to the President of the United States on 14 April, 2019; while the details of the report and the DoC’s recommendations have not yet been released to the public, the President is expected to decide within 90 days of the submission date, if further action will be taken.

In February, two large US utilities warned of the potential early closure of up to nine reactors due to economic distress, should the cost of their fuel increase. With only two reactors under construction in the US, the net impact of such closures could result in a net decrease in US demand over time. However, the propensity of reactors to be granted 20-year life extensions in the US could partially offset the impact of unexpected closures. The latest such extension was granted to the Seabrook nuclear power plant in the state of New Hampshire in March, 2019. 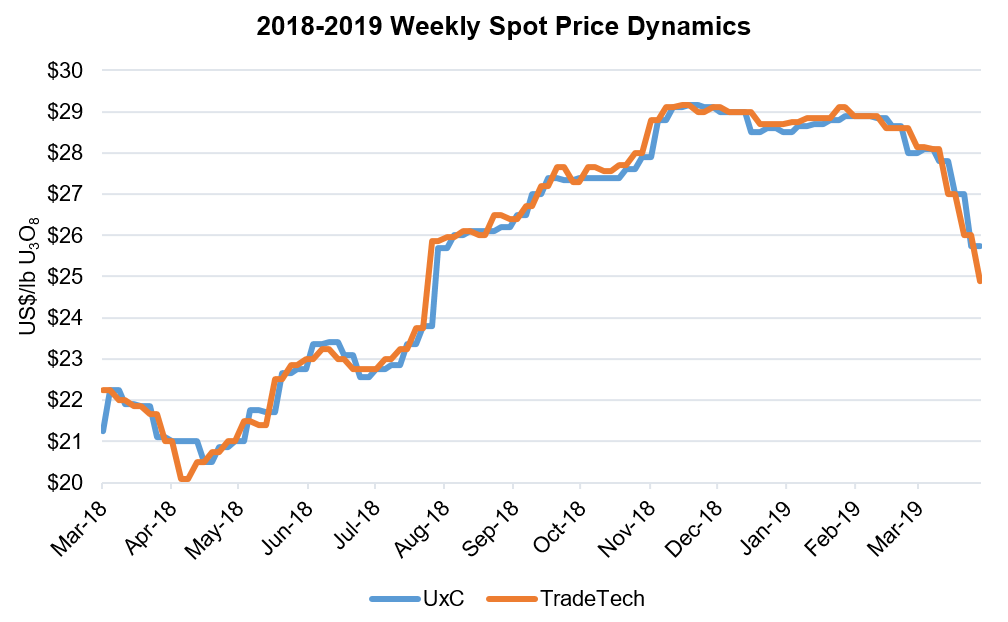 After reaching a three-year high of US$29.00 at the end of January, 2019, the spot price began to weaken with a sharp price decline in mid-March, closing the quarter at US$25.33. While a contraction of market activity at the outset of the year is generally to be expected (based on the historical distribution of annual activity), the uncertainty arising from the DoC investigation exacerbated the first quarter weakness. Additionally, the slightly declining trend in spot price set the conditions for intermediaries to put further pressure on prices by selling material in their effort to lock-in margins on material acquired at the beginning of the modest 2018 price rally.

In the long-term market, prices essentially remained around US$32.00 per pound U3O8 throughout the quarter. There continued to be a general lack of contracting in the term market due to the uncertainty arising from the pending decision following the Section 232 investigation.

Sales volumes can vary substantially each quarter, and quarterly sales volumes vary year to year. However, first quarter sales volumes are typically expected to be lower compared to other quarters due to lower levels of activity in the market at the outset of each year.

Kazatomprom’s production expectations remain unchanged from previous guidance, consistent with the intention to flex down planned production volumes by 20% for 2018 through 2020 (versus consolidated planned production levels under Subsoil Use Agreements, which were increasing annually over that period). With the flex down, under the existing Subsoil Use Agreements, production is expected to total approximately 22,750 to 22,800 tU (100% basis) in 2019; without the reduction, production would have exceeded 28,500 tU (100% basis) in 2019.

The Company continues to expect to maintain an inventory level of approximately six months of annual attributable production at 2019 year-end.

Kazatomprom is the world's largest producer of uranium, with the company’s attributable production representing approximately 23% of total global uranium primary production in 2018. The Group benefits from the largest reserve base in the industry. Kazatomprom operates, through its subsidiaries, JVs and Associates, 26 deposits grouped into 13 mining assets, all of which are located in Kazakhstan and mined using ISR technology.

Kazatomprom securities are listed on London Stock Exchange and Astana International Exchange. As the national atomic company in the Republic of Kazakhstan, the Company has partnered with substantially all of the leading players in the nuclear and uranium industry globally. The Group's primary customers are operators of nuclear generation capacity, and the principal export markets for the Group's products are China, South and Eastern Asia, Europe and North America. The Group sells uranium and uranium products under long-term contracts, short-term contracts, as well as in the spot market, directly from its headquarters or through its Switzerland-based trading subsidiary, THK.

All statements other than statements of historical fact included in this communication or document are forward-looking statements. Forward-looking statements give the Company’s current expectations and projections relating to its financial condition, results of operations, plans, objectives, future performance and business. These statements may include, without limitation, any statements preceded by, followed by or including words such as “target,” “believe,” “expect,” “aim,” “intend,” “may,” “anticipate,” “estimate,” “plan,” “project,” “will,” “can have,” “likely,” “should,” “would,” “could” and other words and terms of similar meaning or the negative thereof. Such forward-looking statements involve known and unknown risks, uncertainties and other important factors beyond the Company’s control that could cause the Company’s actual results, performance or achievements to be materially different from the expected results, performance or achievements expressed or implied by such forward-looking statements. Such forward-looking statements are based on numerous assumptions regarding the Company’s present and future business strategies and the environment in which it will operate in the future.  THE INFORMATION WITH RESPECT TO ANY PROJECTIONS PRESENTED HEREIN IS BASED ON A NUMBER OF ASSUMPTIONS ABOUT FUTURE EVENTS AND IS SUBJECT TO SIGNIFICANT ECONOMIC AND COMPETITIVE UNCERTAINTY AND OTHER CONTINGENCIES, NONE OF WHICH CAN BE PREDICTED WITH ANY CERTAINTY AND SOME OF WHICH ARE BEYOND THE CONTROL OF THE COMPANY. THERE CAN BE NO ASSURANCES THAT THE PROJECTIONS WILL BE REALIZED, AND ACTUAL RESULTS MAY BE HIGHER OR LOWER THAN THOSE INDICATED. NONE OF THE COMPANY NOR ITS SHAREHOLDERS, DIRECTORS, OFFICERS, EMPLOYEES, ADVISORS OR AFFILIATES, OR ANY REPRESENTATIVES OR AFFILIATES OF THE FOREGOING, ASSUMES RESPONSIBILITY FOR THE ACCURACY OF THE PROJECTIONS PRESENTED HEREIN. The information contained in this communication or document, including but not limited to forward-looking statements, applies only as of the date hereof and is not intended to give any assurances as to future results. The Company expressly disclaims any obligation or undertaking to disseminate any updates or revisions to such information, including any financial data or forward-looking statements, and will not publicly release any revisions it may make to the Information that may result from any change in the Company’s expectations, any change in events, conditions or circumstances on which these forward-looking statements are based, or other events or circumstances arising after the date hereof.

First delivery of nuclear fuel from Kazakhstan to NPP of the PRC
851
Kazatomprom announces inclusion of its commercial bonds in KASE official list
946
Kazatomprom has signed memorandums of cooperation in the nuclear industry with French companies
1221
Kazatomprom won the Grand Prix at the DAMA Kazakhstan Awards with the “Integrated Planning System” project.
1078
Leave feedback