This update provides a summary of recent developments in the uranium industry, as well as provisional information related to the Company’s key 2018 operating and trading results and 2019 operating and trading guidance. The information contained in this Operations and Trading Update may be subject to change. It may differ from the final audited results to be provided in the 2018 Operating and Financial Review, which is expected to be released on 6 March, 2019.

After a prolonged period of oversupply in the uranium market, 2018 saw a shift in balance toward undersupply, with the market being in slight deficit. The shift can be partially attributed to emerging interest in physical uranium from financial institutions throughout the year, although major production cuts from the world’s largest uranium producers played a prominent role in the modest improvement. In Kazakhstan, uranium production was reduced by 20% against planned levels under Subsoil Use Agreements. In Canada, Cameco Corporation took one of the world’s most significant single sources of uranium out of the near-term supply stack when it suspended production from its McArthur River / Key Lake uranium mine for an indeterminate period.

The supply side improvements were met with mixed developments on the demand side. In the near-term, ongoing uncertainty related to the potential introduction of uranium import quotas or tariffs, stemming from the United States Department of Commerce’s (DOC) investigation under Section 232 of the U.S. Trade Expansion Act (1962), contributed to a continued lack of significant long-term contracting activity in the market. According to the Act, the DOC is expected to complete its investigation within a 270-day period (ending mid-April 2019) and provide the President of the United States with recommendations, who then has 90 days to make a final decision. The impact of the recent US government shutdown on these timelines remains unknown.

The demand news from a medium- to longer-term perspective was more balanced. On one side, the United Arab Emirates’ Nawah Energy Company updated the reactor construction schedule for Barakah-1, indicating it is not expected to come on line before 2020 (previously 2018). Additionally, the pace of reactor restarts in Japan remained slow, with only nine units approved to operate at the end of 2018 (five more than the end of 2017). However, from a more positive demand perspective, the French government announced a new energy policy, in which previous plans to reduce nuclear’s share of power generation to 50% were delayed until 2035 (previous target was 2025). Adding to the positive global policy improvements, a referendum in Taiwan regarding the potential abolishment of nuclear power was defeated with nearly 60% of votes against the plan, which may help improve public opinion in the country. Finally, South Korea’s nuclear phase-out policy faced growing pressure, as a national campaign coordinated by civic organizations collected over 300,000 signatures opposing that government’s nuclear-free energy plan. 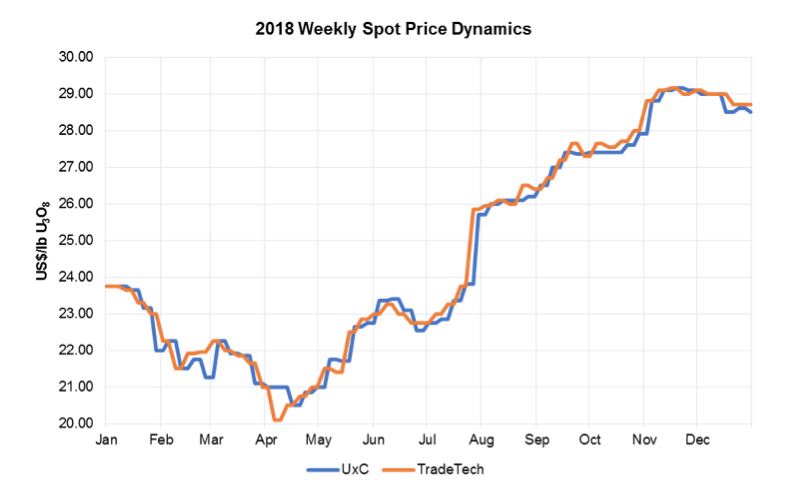 It was a record-breaking year in the spot market in 2018, with nearly 90 million pounds contracted for delivery within 12 months (data from UxC). The spot price at the outset of the first quarter was US$23.75 per pound U3O8, reflecting the market’s initial reaction to a reduction of excess supply of uranium products. As uncertainty began to set in, the price gradually drifted to the 2018 low of US$20.10 per pound U3O8 in mid-April.

Additional demand began to materialize in May and it generally persisted, supporting a gradual improvement of the spot price to US$22.55 per pound U3O8 by the end of June. More substantial improvement was marked by the July initial public offering (IPO) of Yellow Cake plc, which acquired over 8 million pounds of U3O8 from the spot market. Later that month, Cameco Corporation’s announcement that the McArthur River facilities would remain shut down for an indeterminate period due to weak market conditions, helped trigger a further rise in the spot price. The spot price peaked at US$29.15 in the fourth quarter, shortly after Kazatomprom’s IPO, with public trading of the Company shares and global depository receipts (GDRs) on the Astana International Exchange (AIX), and GDRs on the London Stock Exchange (LSE).

At year-end, the spot price fell to US$28.60 per pound U3O8 as some market intermediaries tried to make final sales prior to the close of the year.

In the long-term market, prices started the year at US$30.00 per pound U3O8 and essentially remained within a two-dollar range above and below that value throughout 2018. The modest appreciation and depreciation of the long-term price was correlated with the variation in spot price during the year, although there continued to be a general lack of contracting in the term market.