This update provides a summary of recent developments in the uranium industry, provisional information related to the Company’s key third quarter operating and trading results, and updated 2019 guidance. The information contained in this Operations and Trading Update may be subject to change.

Uncertainty related to the US Section 232 investigation had a notable impact on long-term contracting in the uranium market throughout the first half of 2019. The investigation reached a conclusion on July 12, when the US President announced that no trade actions would be taken in the uranium market at this time. Along with his decision, the President also formed the United States Nuclear Fuel Working Group (the “Working Group”) and requested that the Working Group review the entire US nuclear fuel cycle, beyond domestic supply. Recommendations were expected by mid-October, however, the US President granted a thirty-day extension to the initial deadline.

The Russian Suspension Agreement (“RSA”) is set to expire on December 31, 2020, and the US Department of Commerce (“DoC”) must terminate its antidumping investigation by that date. However, earlier this year, the DoC formally opened consultations with respect to a possible extension of the RSA. Negotiations are underway behind closed doors, adding additional uncertainty regarding Russia’s future access to the US market.

Japan’s nuclear power industry remains challenged; none of the six additional reactors that have received preliminary restart approvals from Japan’s Nuclear Regulation Authority are expected to resume operation this year. Moreover, several of the nine operating reactors are expected to suspend operations in the coming year in order to complete antiterror facility construction.

In October, China's Ministry of Ecology and Environment issued construction licenses for the Zhangzhou nuclear power project in China's Fujian province. Construction of the site’s first reactor unit, the domestically-designed Hualong One reactor, began one week after the issuance of the license.

At the India Energy Forum's Nuclear Conclave in October, the Department of Atomic Energy Secretary K. Vyas indicated that India plans to build 21 new nuclear power plants by 2030, with seven already under construction.

Several other positive future demand developments came about over the past few months. Uzbekistan has indicated that it intends to add two reactors to the two VVER-1200 units already proposed for construction in the country. In France, the government has asked Electricite de France to consider construction of three new nuclear plants, each with a pair of its EPR reactors, in order to fulfill the government commitment to become carbon neutral by 2050. In the US, utilities Duke Energy and Tennessee Valley Authority announced their intention to pursue license renewals for their respective reactors in North Carolina, South Carolina and Alabama. In Spain, the Vandellos II nuclear plant applied for a ten-year license renewal to 2030.

A major supply development came with Kazatomprom’s third quarter announcement of its intention to extend production cuts by 20% through 2021, compared to the planned levels under Subsoil Use Contracts. Kazatomprom began working with its partners to assess the impact and implement the plan across all of Kazakhstan’s uranium mines. The full implementation would keep Kazatomprom’s 2021 production at a level similar to 2019 and 2020, removing up to 5,600 tU from anticipated global primary supply in 2021.

Also on the supply side in Central Asia, Orano signed a partnership agreement with the Uzbek State Committee for Geology and Mineral resources (“GoscomGeology”) to develop mining exploration and operations activities in Uzbekistan. The partners are expected to create a joint venture, with 51% held by Orano and 49% held by GoscomGeology. The parties intend to work together on uranium mining projects in Uzbekistan, particularly in the Navoi region, a desert area at the heart of the uranium-rich province of Kyzylkum.

After a modest price increase that followed the US President’s decision on the Section 232 investigation in July, the uranium spot price settled and remained between US$25.00 and US$25.50 per pound U3O8 through most of the third quarter. Increased buyer activity pushed the price up slightly towards the end of the quarter, though it retreated back to the US$25.00 level at the beginning of the fourth quarter. 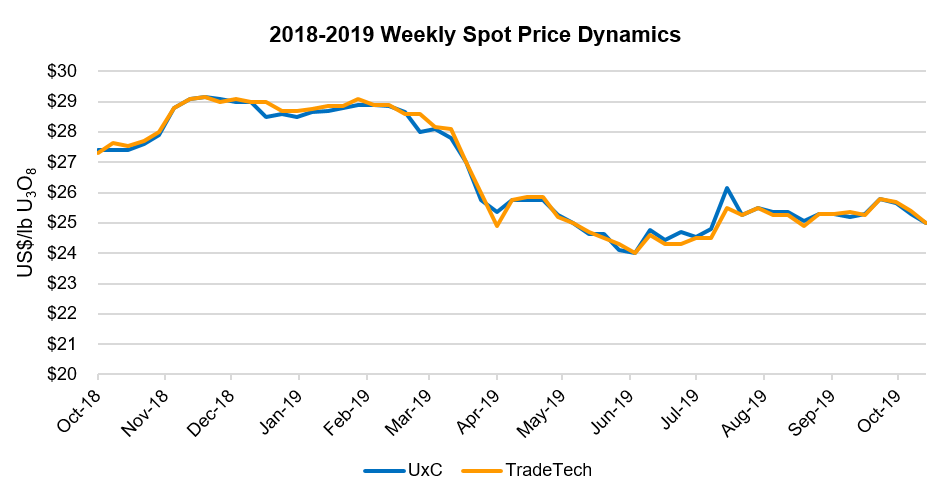 In the long-term market, utilities have continued to feel little pressure while they evaluate the uncertainty in the current environment, including the potential outcomes following the Working Group’s review of the US nuclear fuel cycle. Contracted volumes amounted to nearly 68 million pounds U3O8 through the first nine months of 2019, compared to about 58 million pounds over the same period in 2018. Although there was an increase in term market discussions and activity near the end of the third quarter, there was little impact on the reported long-term price.

Production on both an attributable and on a 100% basis was higher in the third quarter and through the first nine months of 2019, compared to the same periods in 2018. The increase was due to higher 2019 production levels under subsoil use contracts (as expected and previously disclosed), with difference in year-over-year attributable share being related to different production levels at various assets, and the mix of ownership interest levels in each asset.

Group and KAP sales volumes in the third quarter and through the first nine months of 2019 were lower than in 2018, primarely due to a low level of contracting activity in the market, as well as a customer-driven delivery schedule that is weighted to the fourth quarter. Sales volumes can vary substantially each quarter, and quarterly sales volumes vary year to year due to variable customer delivery requests and physical delivery activity.

Average sales prices were higher due to an increase in spot price in 2019 compared to the same periods in 2018, and the close correlation between the Company’s contract portfolio and current uranium spot prices.

Guidance for C1 cash cost (attributable basis) and all-in sustaining cash cost (attributable C1 + capital cost) are unchanged. However, as previously noted, the KZT has been weaker against the US dollar than KAP’s 2019 budget assumption of 370 KZT/1 USD. As a result, both C1 and all-in sustaining cash costs have trended to the bottom of their expected ranges shown in the table above.

The Company continues to target an ongoing inventory level of approximately six to seven months of annual attributable production. However, KAP is constantly monitoring the uranium market, and the Company may pursue a strategy of increasing its inventories in unfavorable market conditions.

Kazatomprom is the world's largest producer of uranium, with the company’s attributable production representing approximately 23% of global primary uranium production in 2018. The Group benefits from the largest reserve base in the industry and operates, through its subsidiaries, JVs and Associates, 26 blocks grouped into 13 mining assets. All of the Company’s mining operations are located in Kazakhstan and mined using ISR technology with a focus on maintaining industry-leading health, safety and environment standards.